Established in 1995, Brotherhood, Incorporated is a minority non-profit community based organization created to join the fight against the spread of HIV and alleviate the struggles of African Americans living with HIV and AIDS. This agency, governed by a board of directors, has a racial/ethnic composition that is reflective of the diverse populations served. The mission of Brotherhood, Incorporated is to develop and implement programs and services that impact the economic, social, and health disparities that exist within underserved and at-risk communities through education, enlightenment, and empowerment.

The event was held at the LGBT Community Center 2727 South Broad Suite 102. Light refreshments were served along with light cocktails (wine) to allow participants to loosen up and speak freely in the discussion. The chairs were set up in a circle which indicated to all that it should be a group discussion. In the beginning, everyone was asked to introduce themselves, tell the group what their occupation was, and what was their proper gender pronoun usage.  The night’s discussion was centered around sexual abuse in the transgender community featuring our very own “NOLA Dollhouse wives of Prevention!” Questions were asked around the theme of sexual abuse, but the highlight was when each one of the “Dolls” was given the opportunity to share their own very unique stories and experiences that brought them to where they are today! Each one of these ladies has walked a journey separate yet share similar experiences from sexual abuse, discrimination, to being  treated less than human beings. Several students from Tulane Medical School, a representative for a congressman, other CBO’s, and 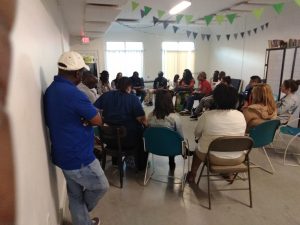 This report provides descriptive, unweighted data that can be used to describe HIV infection among MSM and the percentages reporting specific risk behaviors, HIV testing, and participation in prevention programs.